I miss my mother 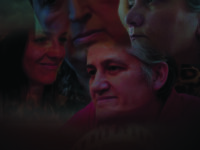 Being a psychologist in the psychosocial sector for more than 10 years, Ülkü dursun has accompanied many women in their migratory journeys… Like countless difficulties, the language barrier seems to be the most trying.

All the more so as it is often the argument of reproach and threat the most popular by certain administrative institutions and political powers.

Her hypothesis:
Feeling humiliated by these “welcoming” voices, they keep silent about their foreign language.
Like a lost and injured child, they find refuge in their mother’s language.

They don’t speak but they don’t think less
One day, they say nothing more but they dream no less

In any case, they feel, they see, they create, they move forward, with or without you.
Preferably with, out of spite without you…

On stage :
herself
her mother
her patient
her colleague
her friend

Seemingly silent, all are accompanied by their voices…
During a meeting, they tell a story…
In which there are you, me and us…
A magic then takes place…
I leave you the choice to see what he sings to you.

A Film by Ülkü Dursun