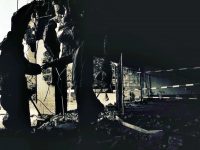 One of the most questioned issues in urban transformation is its  effects on those living in the area. This renovation process, which is often applied to areas developed without an appropriate plan or buildings constructed according to old regulations – not taking big eartquakes into account – also affects the lifestyles of those living in these neighborhoods. So the issue with urban transformation is not just to make new buildings…

What is a district or neighborhood? Not geographically, but from life style point of view?

Bursa in Turkey, the 5th biggest city in Turkey, had Kamberler district, for example, with the Gipsy origin inhabitants who had a distinctive lifestyle. You could witness the lives of open doors and windows that made you to feel the flavor of the culture while passing through the streets. From windows to living rooms, from entrances to backyards, from front doors to streets…

Music, dance, .. There are chimes in my head, I remember. Year 1967. Then the belly dancer at our wedding. Year 1994 .. All from the neighboring district. I walked in the streets of the district between those times. I grew up, but that unique mood there did not change. Nobody can say as an excuse that the area was the source of things like theft, fights, etc. Now this area does not exist, but such things exist here and there as in before.

Ye, it is not an exaggeration; there is now no Kamberler district. The whole neighborhood was literally razed to the ground. There are now a big junction, some pavements, a so-called park… But, what about the lifes? The people of the Kamberler were obviously not going to evaporate. They had to scatter to nearby places in the neighborhood. The irony was that they had to move to the apartments, which are at the contstruction grade that triggered the urban transformation. Almost all have been built before the new earthquake regulation. They are in the streets where even the fire brigade cannot enter, with 5-storey apartments constructed on the old city plan for individual houses.

I was glad for a moment when I saw the signpost School of Musicians in one of the historic buildings. And next to it was the Musicians Coffee. But the Gipsy culture is not only about playing music and dancing! The Mad Ayten; the mysterious hero of our childhood, who walked in the streets with her drum looking for her impossible past love that she had lost. Her statue is one of the best works. But how much does the stone sculpture reveal the soul of Mad Ayten, the gipsy love heroine? Where are the sad songs and the joyful laughters in those streets? Neighborhood spirit, friendship?..

The whole world is actually experiencing urban transformation, because the people are migrating to cities more and more.

Another example is from Brussels.

Brussels Canal was built in the 18th century. There were industrial organizations on both sides. As the industry was in this region, migrant workers and their families, especially from African countries, settled in this neigborhood.

The Brussels Kanal Zone is now being restructured. The goal is to make this area a center of attraction, as in most European cities. Like Seine River of Paris, for example… Art workshops and buildings with interesting architecture have already filled the environment. However, today’s small industrial enterprises are not removed. According to the new urbanism, a city that is intertwined with all functions is being built. For example; garbage incineration plants are located right next to the shopping center. At the opposite side is the marina.

In order to understand the impact of this development on the social structure, anthropologists from Ethiopia, Zimbabwe, Mozambique and South Africa are collaborating with the University of Leuven to study the situation in the neighborhoods. The study is carried out with the students of the University of Leuven. With local people and organizations, they are conducting field research in the area, trying to understand the thoughts of the people. They examine not only the present but also the social influences from the colonial times. To make sure that some not exploited to make conditions for others better.

As a result, this process, called urban transformation, must be in harmony with the people living in the city. In order to eliminate the negative effects of yesterday, whether structural or cultural, the future should be built together. Or we will be scattered in a vicious circle.
Speed ​​should not be an excuse.