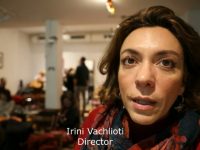 For the fourth time in a row, FREE FLYING FILMS organised the GREEK LIGHT filmfest at Art Base Gallery. In the company of 6 renowned Greek film makers, you will be able to enjoy an enticing mix of Greek short films and documentaries. The proceedings of this festival go to Loket Leros, an NGO which helps refugees who arrive by boat on the island of Leros, in the most difficult of circumstances. Loket Leros was established by a group of Dutch volunteers in both Leros and Amsterdam in September 2015. Every penny is being spent on providing food, clothes and shelter for incoming refugees.