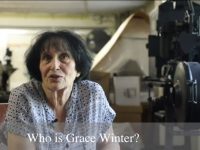 Grace Winter; an art historian and social anthropologist, a documentary researcher in Cinemateque Royal Belgium and a consultant for MOOOV and Rotterdam film festivals.

She made the milestone documentary “Marquis de Wavrin, du manoir à la jungle” which put light on the anthropologist author, photographer and film maker Marquis Robert de Wavrin and the lives of the native people in South America between 1910-1930 through his eyes.

Who is Grace Winter?

What is impressive about Wavrin?

Cencorship in the original version