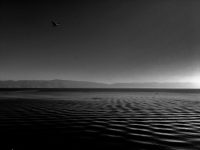 On the one hand, we are trying to attribute a meaning to everything. On the other hand, life constantly reminds us of its meaning. If knowledge is formed by experience, how can we then say that we have knowledge about life without understanding the experiences?

We come to the world as individuals. One. One is a number which is visualised with a simple line in all languages. The Latin origin expression that we call the Roman numeral is: “I”. It is a single horizontal line in Japanese, which was developed from the Chinese alphabet: “一”.  Just like the Buddha statue lying with its head on its hand. Then comes the modern numeral system which comes from Arabic: “1”.

We do in most cases not live alone. We become 1+1. When we look at the Roman numeral, two I’s come side by side: II. In Japanese, two straight lines overlap: 二. It is a little different in the modern system: 2. It is as if we have secured the base, but we have continued with a little curving on it.

Then it multiplies. 2+2 = 4. The Romans combined I with V, which represents five, and said IV. It’s like telling us beforehand that the five is on the way. The Japanese made a square first, then added two more lines like a curtain: 四. It looks like saying we look at life through the window of our home. In the modern system, on the other hand, there is a search for balance: 4. We are trying to carry the burden of life by standing on one leg.

Then we continue to multiply. 4+4 = 8. The Romans based it still on five in a proliferating manner: VIII. Perhaps from the expanding nature of the empire. The Japanese are back to two lines: 八. By learning to bow in front of each other. We have in the modern system two circles stuck together: 8.

It is the centre hole that makes it useful.

Shape clay into a vessel;

It is the space within that makes it useful.

Cut doors and windows for a room;

It is the holes which make it useful.

Therefore profit comes from what is there;

Usefulness from what is not there.

The wealth is in the emptiness. Right in the middle of zero.

Or if 8 lies down, loosening itself slightly, here is the symbol of eternity: ∞.

We fight all the time about boundaries: Ah, you try to get me into your circle… It’s like a race. We then break the connection and we also break ourself off from the point we leave. We become one line again, count from the beginning. We face the same situations, because the truth seems to be lying not on the boundaries of the circle, but in the experiences within. Until we understand (in) the infinitive journey within us. It takes us to the story of butterfly again.

200 eggs… A butterfly lays about this number of eggs on the leaves or over the flowers. About four days later the caterpillar appears.

He eats the shells of his own egg first. No waste. Then it begins to feed itself on the leaves where its mother left it. It grows apparently up to a 2000 times bigger size. But after a certain point it does not grow in length. It begins to shell itself.

Then the caterpillar starts to weave its cocoon around itself. He is preparing to die without dying, as Rumi says. It almost melts in the cocoon. All his cells, all his experiences… Genetic heritage, hopes… The caterpillar destroys itself. Because, there is something further in itself, as the Turkish dervish Yunus says it.

Then patience… Everything takes shape at the right time. Life has its own clock.

Finally, the time comes for the miracle. Time to meet all its colours. But the butterfly takes it with caution, too. First, its wings will dry and become stronger. Then comes freedom.

Change is possible says the butterfly’s story. The secret of the miracle is not in the circle around us, not in our shell, but inside us. Not in envelopes, but in the story. Not on the bumps, but in what we go through while overcoming them. The journey takes us to infinity.