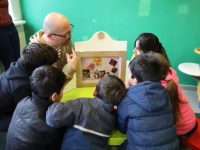 He said, my name is Irfan. “Do you know the meaning?” I asked. Of course, he didn’t know. How would he?.. Before he had the opportunity to learn, he fell on the road at such an early age. He escaped from the everlasting fire of the Middle East with his family and came to Belgium.

In our childhood, there were fake pistols we played with. Then “crackers” which spark and make sound when rubbing against the stone. We also made mini explosions with carbide. What a thrill!… We were trying to experience the excitement we saw in the American comics in our quiet and calm streets.

But for the children born into or raised in a war, these sounds do not recall good feelings. There was fear, there was hiding, there was escape. There was the desperation on the faces of their parents who they were used to see as the strongest people in their lives.

These children were in the the asylum center that we visited in Belgium. Or the relatively lucky ones, I should say. Because they were the only ones who were able to come here and secure their most basic right; living!…

We are from the same geography as Turkey, my homeland, is directly connected to the Middle East. They run like us, they joke like us, they even fight with each other like us. The names are also familiar; Hossain, Irfan, Muhammed… Irfan learned the meaning of his name in a foreign environment, away from his homeland, from a Turkish man who was also away from his homeland.

Of course, the number of refugees in Belgium is not like in Turkey. There were only 23,443 applications in Belgium in 2018. The top three were those from Syria, Palestine and Afghanistan. New shelters are constantly being created.

Besides the basic official framework, many volunteer activities are also carried out in the asylum centers. One of them is the “kamishibai” activity for children by De Verhalenweverij association. The children in this activity visualize their stories by drawing pictures or cropping and sticking photos from newspapers and magazines on blank cardboards. Then they slide them in a box they cut like a television screen and tell the story throuh.

The name of the association actually describes what it does. Verhalenweverij means storytelling. Apart from kamishibai, they read stories to and with the children, or make up the stories together. The purpose is to enhance their reading habits, to support their self expression skills and to revive their self-confidence. In addition, through a book donation campaign, they have provided some of the centers with library or book corners.

The light in the eyes of the children is giving hope for the future. A seed can make a flower.. A flower can lead to a flower garden…

You may watch the trailer showing the activity in the attached video.