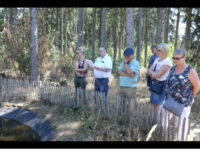 Memories are some kind of recording system. Our lives pass before our eyes like a filmstrip. Then come the objects we interact with. They contain different aspects of life. Bell is one of them.

Bells take place in different parts of social life, big or small. We see them in the churchs, in the hand of Santa Claus, at the entrance of a door, on the neck of a sheep or as a music instrument. Large bells have been used in church towers since about 600 AD to invite people to worship.

The Anti-Bell project was carried out by Ruth Ewan with the aim to raise awareness about bells. In theproject, an English church bell manufactured in 1835 was melted in the last bell foundry of the UK, Taylor’s Bell Foundry. As the bell melted, viewers toured the foundry to observe the history of the facility and the importance of bells in relation to colonialism. After the tour, they watched the molten bell metal pouring into the floor of the foundry. The resulting object was viewed as the remnant of the event.

Ewan was also interested in how the bell songs were used for both control and resistance. The work of a research group on the social history of music and its historical links with the bell through its carillon was also included in the project.

As a result, a booklet was produced by the group which through texts and images represented the social and political history of the bells. The project showed how much an object could mean throughout social history.

We also try to fit the definitions or categorizations in our common memory. For example, the way we look at Africa. We still keep stereotype way of looking at this continent. We treat it like a single country, a huge land full of jungles and deserts with one type of people. However, when it comes to Europe, we can tell the names of dozens of countries at once. Yet, one country  does not mean one culture. There are officially three languages ​​and regions even in such a small country like Belgium.

In Africa, even when we look at the borders drawn by ruler, there are 54 independent countries. The number of languages and cultural aspects are obviously even more than that. However, we look at them insistingly in the same way, instead of trying to understand the unique characteristics of this cultural spectrum with a background of thousands of years.

CNN shows programs like Inside Africa almost every day. However, although it says Africa, it covers only limited number of areas that are far from representing the entire continent. Even worse, the success stories are always measured against western-style criteria. Western-style business methods, fashion design that will be appreciated by the west, a boy doing ballet in a village or kids playing football. We hardly see unique examples.

African Art Now: Masterpieces from the Jean Pigozzi Collection caused reactions because it also looked at the African continent from a narrow perspective. The exhibition was introduced as contemporary African art, but contemporary on what basis? The question was why the museum used a Swiss curator’s collection to describe contemporary African art. Yet with a limited scope regarding the artists and the countries. Otabenga Jones & Associates staged the action Africa Is a Continent to protest the exhibition. The focus of this protest was the museum’s display of African art without the necessary context.  The members of the group carried  boards outside the museum, saying “You can’t fit our blackness into your white box”, “Give me death or give me death”, “Africa is not a country”. The exhibition in a sense provided with a broader view of African voice, if art is to be so.

In both projects, involvement of people with different voices enriches the message of art. We need to create environment to make art a way of living through participation. Is it easy? Maybe not. But “if we go the easy way, we never change” as Marina Abramović says.  Is it then not worth to take the challenge?

The photo belongs to another participatory activity, a for poetry walk in a natural park organized by Limburgs Landschap vzw in Hengelhoef.  The video of the activity can be seen here: