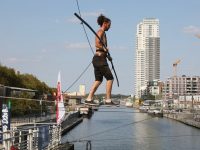 Every neighborhood had empty yards. “Where are you going, boy?”, the mother would ask. The answer was mostly “to the yard!”.  Besides, every age had a peer. Most of them were also classmates at school.

The children of the neigborhood plated football in the yards. But there was also, bike renting man who would rent the bikes for 25 cents / one round. The bagel seller was there, the luck-fortune-fate-capturer, the sherbet seller, …

There was a big radio at home. There was no television yet and no lace covering it. The radio was on a shelf above so that the children could not play with it. This special place was basically a board on two support bars and the radio on it. Under the shelf was a tiny lamp facing down; the night lamp.

The most enjoyable times were the fair times in town. A big tent and a man walking outside on a rope…

But … he was like an alien or something unusual!.. He got a lamp on his butt… Just like our night lamp. But it was flashing without electricity! We would watch with our mouths open…

Now neither the yards nor the fairs remained.

Nükhet Duru, the Turkish Carmen, how nicely describes the tightrope walker in her song!

The tightrope walker playing on the rope

The tightrope walker is crying on the rope

Life continues on the rope

Life goes back and forth on the rope

Everything is hidden at the “moment”, in fact, walking on the rope is the most useful thing in this respect – to feel it. All your antennas communicate in both directions – receiving and transmitting; with the rope, the wind, the sounds, ..  and most importantly with yourself.

Even though the tightrope walking seems like a show outside of everyday life, there is a  school of it in the middle of Brussels. They teach to people of all ages. Starts on the ground, continues in the air.

The Ecole de Cirquis de Bruxelles is located in the Tour and Taxis site, right in the heart of the city. Moreover, it has become the European Center for Tightrope Walking. Center Européen de Funambulisme is also located here. As the city of Galway, Ireland, became the European Capital of Culture for 2020, they are preparing to cross the River Corrib with 400 tightrope walkers from all over Europe. This project, designed by Vincent Wauters, founder and director of the Ecole de Cirquis de Bruxelles and Ulla Hokkane, Galway Community Circus director, is called “Wires Crossed”. The Center in Brussels, with Galway and Berlin, has a key role in the development of this project. Now the goal is to achieve the number of 400 tightrope walkers by 2020.

You can watch in the video of an activity where the school performed over Brussels Canal.

The Turkish saying “two tightrope walkers do not walk on the same rope”  is used for cunning or tricks of two people to deceive each other if they meet for business, etc. In our times, unfortunately, senses are also used to abuse goodwill. Cunning is sometimes considered being skilfull or intelligent. But on the rope, the tightrope walkers are doing the opposite. Balanced, respectful …