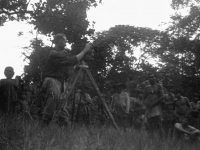 When colonialism and looting were deemed legitimate, the invaders saw everything in their own right.  Natural resources, processed products … And the worst of all; people … They stole and sold them… They became nightmares for many people and took away their lives.

As they claimed these places as an extension of their country and also considered it as research through exploration, they exhibited the things they brought time by time in their own countries. These exhibitions unfortunately also included human beings. It did not happen too long ago, in fact it was less than a century away.

Belgium was one of them.  In 1897, the country brought people from Congo for a universal exhibition.  From the outside everything was normal; they were staying in their tents and the Belgian people were watching them from afar.  But they forgot one detail.  Belgium was extremely cold for these people.  Seven people fell ill and died.

In 1958, a Congo village was again established for an exhibition and Congolese people were again brought for this purpose. But one day a Belgian boy threw banana to the other side of the fence, and the Congolese people said “enough is enough” and returned to their country.

Today in Belgium, the new generation is taught at school about the persecution in Congo during the colonial period.  This is also an example of a society’s ability to confront itself.

In fact, in the early 1900s, a Belgian young man had a very good friendship with the Indians in South America: Marquis Robert de Wavrin.

Robert was the son of a wealthy miner family.  He lived in a manor that was bought to make his education more convenient. He had a sense of life for himself; a  rebellious soul, sometimes cruel.

One day when he saw two children stealing hazelnuts from the trees in their land, he opened fire on them without thinking.  The children were seriously injured, fortunately did not die. It was the year 1913. The judge did not allow the case to be covered up. Robert took this as an opportunity to take the journey of his dreams to the overseas (if not escaped).

The trip to South America, which began as an adventure, turned into an anthropology study.  He wrote books, took thousands of photographs and made documentary films.  No need to remind the technology of those years.

And years later, he returned home. We do not know what was done about his criminal case. But Belgium and the anthropology world had great treasure of information.  People watched the films in amazement although some places were censored.

Grace Winter is an art historian and a social anthropologist. She works as an archive researcher at Cinemateque, Belgium.  Years later, she reached this archive from various sources and brought them together.  This work took seven years.  And she spent three more years making it a documentary.  She put a light on both Marquis Robert de Wavrin and the lives of South American indigenous people of that time.

And nothing is coincident in life of course. In a documentary film festival in Vienna, she met the son of Marquis Robert de Wavrin’s best friend, the man she had seen in the photographs.  Somehow she realized that he was the son of this man, and she realised that the indigenous people are now making their own documentary films.

Information, documents.. We, the human beings have more of it now. But the most important thing is the wise interpretation of them.  This is what we need as humanity for a better; peaceful and harmonious world.

My interview with Grace Winter may be seen in the video below: